To be allowed inside the Legends’ Guild you will have to have at least 108 Quest Points and you need to finish the Legends’ Quest.You need to prepare adequate runescape gold.

After obtaining 108 Quest Points you will be allowed to pass through the Gates after speaking to one of the Guards. Go in to speak with Radimus Erkle to start the Legends’ Quest. Once you have finished that quest, you will also be allowed inside the building.
Location

The Legends’ Guild can be found north-east of East Ardougne.

To get to the Legends’ Guild you can
Facilities 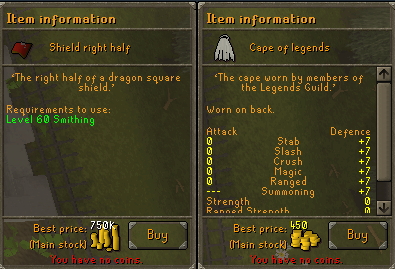 The different Floors
Groundfloor
The Groundfloor holds the Totem where you can recharge your Combat Bracelets and Skill Necklaces. Note: You cannot recharge noted items;

There is also a Papyrus spawn on the table inside the guards’ house.

It is also where you need to be to start the While Guthix Sleeps quest.

First floor
On the first floor you can find Fionella who runs the Legends’ General Store. She sells Swordsfish, Apple Pies, Attack Potions (3) and Steel Arrows.
The Ladder on the west leads to Siegfried Erkle while the Ladder to the east leads to the bank.

Second floor
On the top floor, you will find a bank to the east and Siegfried Erkle to the west, who runs the Legends’ Guild Shop of Useful Items.

Basement
Finally in the basement you can train on Giant Bats (lvl 27), Pit Scorpions (lvl 28) and the Shadow Warriors (lvl 48) known for dropping the Shield Left Half.

The Shop
One of the items Siegfried Erkle sells is the Shield Right Half for 750,000 Gold Coins. This is also where you come to get the Cape of Legends (450 Gold Coins) and Mithril Seeds (that grow into flowers) (300 Gold Coins)

A bank can be found upstairs on the second floor. This bank is convenient for those who wish to cut Magics in the nearby Sorcerer’s Garden to the north.

Play Runescape in Full Screen Mode By Yourself